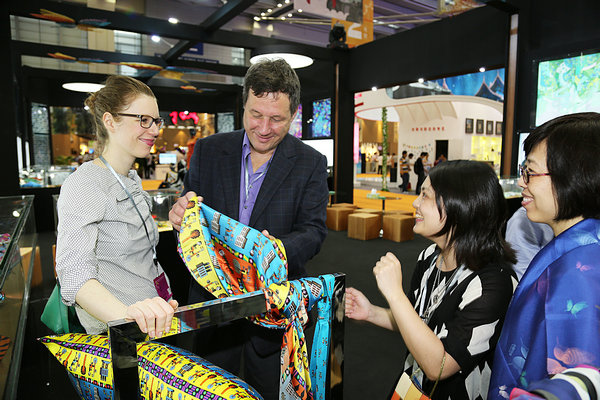 the 10th (shenzhen) international cultural industries fair (icif) ended on the 19th inst. (hereinafter referred to as csccip), as the private enterprise which entered the international cultural industries fair(icif) early, was fruitful on this year's icif. it is reported that, the silk park of china in icif saw a turnover of 136.65 million yuan, a total audience number of nearly 100 thousand, attracting investigating groups from various level governments, tour groups, manufacturing enterprises and others to visit the garden, and winning agreed favorable commences from purchasing agents and audiences at home and abroad.

on the second icif in 2006, china tongyuan ltd's suzhou embroidery research institute made its debut, and turned it up; in the year of 2009, the innovative plaza of china silk culture industry recently built become the assembly room for the fifth culture expo, which fill the blanket of silk culture in icif; in 2014, “international exhibition of creative design of silk” created by silk park of china appeared at the 10th icif. international designers were invited to plan the exhibition featuring “face of silk”, which has been highly appreciated by viewers. “china silk, international design” drew much attention in icif.

the 8 international designers master the "international exhibition of creative design of silk" exhibition of works such as cheongsam, scarves, neckties, ipad bag, etc. attracted a large number of overseas buyers. even the designers are amazing in silk and the modernization of life, to become the number one fan, french designer anette lanz and canadian designer robert l.peters respectively in the site bought 10 scarves, and are ready to back to their own countries to show relatives and friends.

it is understood, this icif, "international exhibition of creative design of silk" in silk park of china also attracted home and overseas buyers from the culture industry investment group, brand agents, wholesale gift companies, etc. to the main venue for procurement negotiation.

icif will help to boost the chinese silk "go globally"

zheng guiquan, the chairman of china tongyuan co., ltd, and chairman of chinese silk culture creative park industry, said in an interview with reporters, brand influence of icif will be greater, and a window will be opened for the chinese silk to go globally. it is based on the icif stage, "international exhibition of creative design of silk -- silk face" after appearance attracts a large number of overseas buyers and audience to come to visit, negotiate, and purchase the silk, the traditional silk in icif blooms and shines. this exhibition has the hope that through the icif platform, the purposes of mining depth of silk culture, expanding silk design view, and promoting chinese silk industry design innovation and internationalization development road.

it is reported, the silk park of china has stepped from shenzhen to the whole country, the silk park of chengdu has broken earth last august, hainan silk park of china will start at the end of the year, and there are suzhou, haining and other places in in garden planning. in the next step, the park will adopt international mode of operation and adhere to the go out policy, promoting chinese silk to the world.