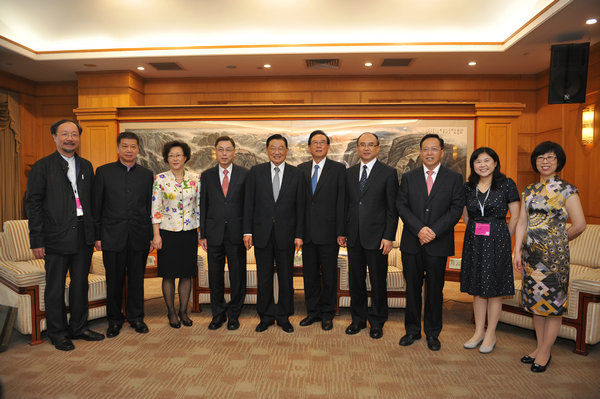 on the afternoon of may 13,2014, before the ceremony of "the first silk culture forum on the two sides of the straits", the mayor of shenzhen xuqin met chen yunlin and jiang bingkun,who are the former president and consultant of association for relations across the taiwan straits ,the former chairman of the board of straits exchange foundation and the president of three three association, respectively in wu zhou guest house shenzhen.

conforming to the trend of the times that economic and cultural exchanges are experiencing unprecedented development, china tong yuan co., ltd, together with chinese silk association and taiwan cultural and creative industries association jointly held “silk cultural creative summit forum of both sides of taiwan straits”. this time, numerous cross-strait guests became attached to silk and got together, because of the convening of "the first cross-strait cultural and creative silk summit". the event has received the strong support of governments and leaders at all levels of the taiwan affairs office, ministry of commerce, ministry of culture, the shenzhen municipal government, shenzhen municipal taiwan affairs office, etc.