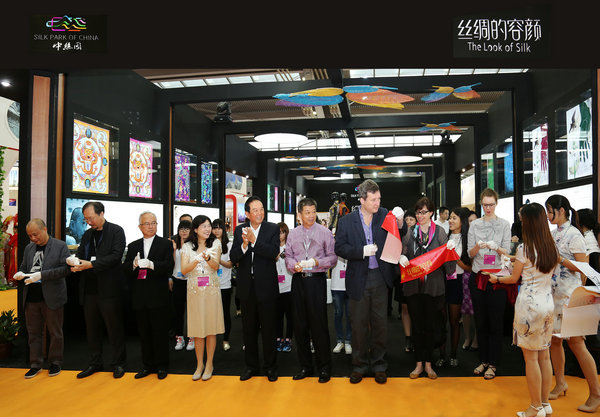 at ten o'clock a.m. of 15th, the supporting "international exhibition of creative design of silk", hosted by the first "summit forum of silk culture creativity of the two sides of the straits", officially opened at the 10th icif in shenzhen. chen yunlin, the ex-president and consultant of association for relations across the taiwan straits, li yongping, the honorary chairman of taiwan culture creative industry union association, zheng guiquan, the chairman of the board of directors of china tongyuan co., ltd., and the designers from eight countries and regions attended and cut the ribbons at the opening ceremony. the chairman of the board zheng gave a brief speech in the opening ceremony and chen yunlin wished the design exhibition a complete success.

it is understood that number two pavilion of the main venue at shenzhen icif, with famous designers from eight countries and regions which have acquired the title of "capital of design", namely germany, france, canada, japan, and south korea, and shenzhen, hongkong and taiwan from china etc. being invited, conducts creative designs with the subject of "face of silk". according to correspondents on site, what meet the eye first are bright-colored and internationalized scarves, personalized ties and works of the eight designers with their brief introductions. all of them are displayed in the exhibition zone.

after the simple opening ceremony of the new exhibition hall, the design exhibition have welcomed a great many of guests. successive guests have been attracted by the exquisite and fine silk, surrounding and appreciating the silk scarves. they try to find which one is the best match and purchase the favourite instantly. some customers came for the admiration, and after purchased the silk scarf, they immediately asked mr. lin pansong, who is known as the "taiwan design godfather", to sign at the scarf as a souvenir; some audiences planned to buy a large amount of works, so they already went to the consultative seat to have a negotiation.

the staff of this design exhibition told the reporter that, several days ago when they were arranging the exhibition, some customers came to consult, sincerely looking forward to the silk works to be shown. before the formal opening of the exhibition, a great number of people has come to visit and buy the products, and the exhibition of chinese silk and international design erupted strong repercussion and agreed favorable comments, leading to a silk fashion in a moment.

the silk on the exhibition also greatly appealed to designers themselves. according to the reporter, anette lanz and robert l.peters, designers from and , respectively bought 10 silk scarves on site to bring back to own countries. it is worth mentioning that, french designer anette lanz had never worked on the silk before she received the invitation. her designed works, on the theme of "the face of real silk", won the favor of clients and audiences, and anette lanz is quite satisfied with her silk works. she told the reporter excitedly that, it was a perfect combination to represent her design works in the form of silk, which was totally beyond her expectation.

it is reported that the "international exhibition of creative design of silk" of this icif covered an area of 300 square meters, and to embody the global fashion and silk affection and to present the works of eight international designers, the exhibition specially chose black as the main color which is internationally popular, and made the works of designers into light boxes so that all the works can be displayed to the guests clearly. the bright spot is the eight vivid cane-woven butterflies which are specially airlifted from to shenzhen. being different from normal butterflies, the designed butterflies have eight wings which signals that the works of the eight designers will become popular and that the scarves can fly across the strait and the hearts of  people across the strait beat as one.